I feel like it is time for another update on VMware Cloud Director (VCD) capabilities regarding establishing L2 VPN between on-prem location and Org VDC. The previous blog posts were written in 2015 and 2018 and do not reflect changes related to usage of NSX-T as the underlying cloud network platform.

The primary use case for L2 VPN to the cloud is migration of workloads to the cloud when the L2 VPN tunnel is temporarily established until migration of all VMs on single network is done. The secondary use case is Disaster Recovery but I feel that running L2 VPN permanently is not the right approach.

But that is not the topic of today’s post. VCD does support setting up L2 VPN on tenant’s Org VDC Gateway (Tier-1 GW) from version 10.2 however still it is hidden, API-only feature (the GUI is finally coming soon … in VCD 10.3.1). The actual set up is not trivial as the underlying NSX-T technology requires first IPSec VPN tunnel to be established to secure the L2 VPN client to server communication. VMware Cloud Director Availability (VCDA) version 4.2 is an addon disaster recovery and migration solution for tenant workloads on top of VCD and it simplifies the set up of both the server (cloud) and client (on-prem) L2 VPN endpoints from its own UI. To reiterate, VCDA is not needed to set up L2 VPN, but it makes it much easier.

The on-prem client can be existing NSX-T tier-0 or tier-1 GW, NSX-T autonomous edge or standalone Edge client. And each requires different type of configuration, so let me discuss each separately.

This is mostly suitable for tenants who are running existing NSX-T environment on-prem. They will need to set up both IPSec and L2VPN tunnels directly in NSX-T Manager and is the most complicated process of the three options. On either Tier-0 or Tier-1 GW they will first need to set up IPSec VPN and L2 VPN client services, then the L2VPN session must be created with local and remote endpoint IPs and Peer Code that must be retrieved before via VCD API (it is not available in VCDA UI, but will be available in VCD UI in 10.3.1 or newer). The peer code contains all necessary configuration for the parent IPSec session in Base64 encoding.

This option leverages the very light (150 MB) OVA appliance that can be downloaded from NSX-T download website and actually works both with NSX-V and NSX-T L2 VPN server endpoints. It does not require any NSX installation. It provides no UI and its configuration must be done at the time of deployment via OVF parameters. Again the peer code must be provided.

This is the prefered option for non-NSX environments. Autonomous edge is a regular NSX-T edge node that is deployed from OVA, but is not connected to NSX-T Manager. During the OVA deployment Is Autonomous Edge checkbox must be checked. It provides its own UI and much better performance and configurability. Additionally the client tunnel configuration can be done via the VCDA on-premises appliance UI. You just need to deploy the autonomous edge appliance and VCDA will discover it and let you manage it from then via its UI.

This option requires no need to retrieve the Peer Code as the VCDA plugin will retrieve all necessary information from the cloud site.

Almost 3 years ago I have published an article how to set up layer 2 VPN between on-prem vSphere environment and vCloud Director Org VDC.

As both vCloud Director and NSX evolved quite a bit since to simplify the whole set up, here comes the part II.

Let me first summarize the use case:

The tenant has an application that resides on 3 different VLAN based networks running in its own (vSphere) datacenter. The networks are routed with existing physical router. The tenant wants to extend 2 of these networks to cloud for cloud bursting or DR purposes, but not the 3rd one (for example because there runs a physical database server).

The following diagram shows the setup. 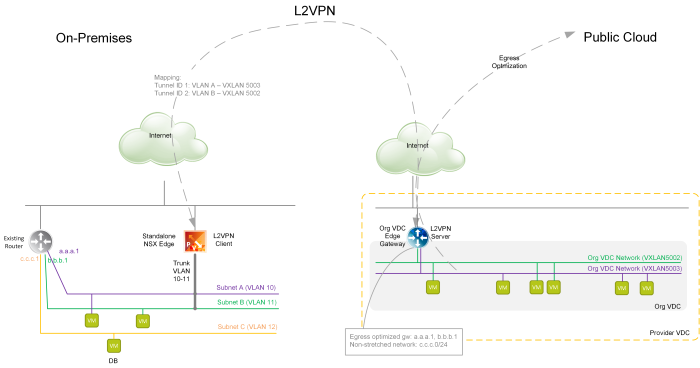 The main advancements are:

Here are the steps:

After multiple questions regarding unstretched networks and some testing I need to make some clarifications.

The routing of unstretched networks through the tunnel is achieved via static routes configured on the Edge GW. So in principle it still works the same way as described in the original article, the difference doing it via UI/API is that the setting of the IPs and routes is automatic.

You can see that the 169.254.64.193 IP address was autoassigned to the 4096 tunnel interface and static route was set to route the unstretched network to the other side via IP 169.254.64.194. The assignment of the .194 address on the other Edge will happen only if that Edge is managed by NSX and is actually performing routing! This is in fact not true for the use case above (with standalone Edge and existing physical router). Therefore the following manual approach must be taken:

Note that this is approach very similar to the original blog post. The only difference is that we must create separate transit network as vCloud Director does not support multiple subnets on the same Edge GW interface.

I had recently multiple discussions about NSX and its Layer 2 bridging capabilities with various service providers. Let me summarize some important points and considerations when you would use which.

Let’s start with simple question – why would you need layer 2 bridging? Here are some use cases:

This is proprietary VPN solution which enables to create encrypted tunnel across IP networks between Edge Service Gateways that stitches one or more L2 networks. These Edge Gateways can be deployed in different management domains and there is also option of deploying standalone Edge which does not require NSX license. This is great for the cloud bursting use case. I have blogged about L2VPN already in the past here.

While this option is very flexible it is also quite CPU intensive for both the L2 VPN Client and Server Edge VMs. This option provides up to 2Gb throughput.

L2 bridge is created in the ESXi VMkernel hypervisor by deploying a Logical router control VM. The control VM is used only for the bridge configuration and its pinning to a particular ESXi host. As the bridging happens in the VMkernel it is possible to achieve impressive line rate (10 Gb) throughput.

It is possible to bridge only VXLAN based logical switch with VLAN based port group. The same physical uplink must be utilized so this means that the VLAN port group must be on the same vSphere Distributed Switch (vDS) that is prepared with the VXLAN VTEP and where the VXLAN logical switch portgroups are created. 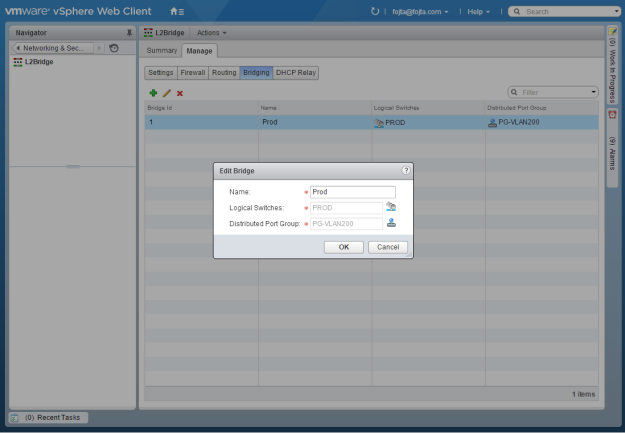 The above fact prohibits a scenario where you would have Edge Cluster with multiple pairs of uplinks connected to separate vDS switches. One for VLAN based traffic and the other for VXLAN traffic. You cannot create NSX native L2 bridge instance between two vDS switches.

This important especially for the collocation use case mentioned at the beginning. In order to use the L2 bridge the customer VLAN must be connected to the Edge Cluster Top of the Rack pair of switches.

If this is not possible, as a workaround the service provider can use the L2 VPN option – it is even possible to run both L2 VPN Server and Client Edges on the same host connected through a transit VXLAN network where one Edge is connected to trunk with VLAN networks from one vDS and the other to trunk with VXLAN networks on another vDS. Unfortunately this has performance impact (even if NULL-MD5 encryption is used) and should be used only for temporary migration use cases. 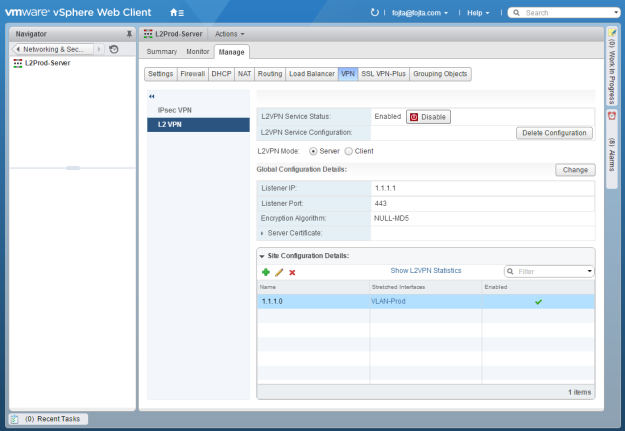 The last bridging option discussed is a new feature of NSX  6.2. It is possible to extend the VXLAN logical switch all the way to a compatible hardware device (switch from a VMware partner) that acts as Layer 2 gateway and bridges the logical switch with a VLAN network. The device performing the function of hardware VTEP is managed from NSX via OVSDB protocol while the control plane is still managed by NSX Controllers. More details are in the following white paper.

As this option requires new dedicated and NSX compatible switching hardware it is more useful for the permanent use cases.

When VMware NSX 6.0 came out about more than one year ago, one of the new great features it had on top of the its predecessor VMware vCloud Network and Security (vCNS) was L2VPN service on Edge Service Gateway which allows stretching layer 2 network segments between distant sites in different management domains. NSX 6.1 further enhanced the functionality by introducing Standalone Edge which can be deployed on top of vSphere without an NSX license and acts as L2VPN client.

Many vCloud Service Providers are now deploying their public cloud with vCloud Director and NSX instead of vCNS so I am often asked how could they leverage NSX in order to provide L2VPN service to their tenants.

As of today neither vCloud Director 5.6 nor 8.0 (in beta at the moment) can deploy NSX Edges and manage the L2VPN service. However it is still possible for the SP to provide L2VPN as a managed service for his tenants.

Let me demonstrate how would it work on the following artificial example.

The customer has an application that resides on 3 different VLAN based networks (subnet A, B and C) routed with existing physical router. He would like to extend subnets A and B into the cloud and deploy VMs there. The VMs in the cloud should access the internet in order to connect to external SaaS services through the provider connection (egress optimization) but should still be able to reach database running on subnet C which is hosted on premises.

The diagram below shows the whole architecture (click for larger version):

On the left is the customer on premises datacenter with physical router and three VLAN based networks. On the right is the public cloud with NSX design I proposed in one of my previous blog articles. While the unimportant parts are grayed out what is important is how the customer Org VDC and the NSX Edge Gateways is deployed.

Now what about the subnet C? How can VMs deployed in the cloud get to it if the physical router is unreachable due to the enabled egress optimization? Following trick is used: