VMware Cloud Director relies on NSX network virtualization platform to provide on-demand creation and management of networks and networking services. NSX for vSphere has been supported for long time and vCloud Director allows most of its feature to be used by its tenants. However as VMware slowly shifts away from NSX for vSphere and pushes forward modern, fully rewritten NSX-T networking platform, I want to focus in this article on its integration with vCloud Director.

Let me start with highlighting that NSX-T is evolving very quickly. It means each release (now at version 3.0) adds major new functionality. Contrast that with NSX-V which is essentially feature complete in a sense that no major functionality change is happening there. The fast pace of NSX-T development is a challenge for any cloud management platforms as they have to play the catch up game.

The first release of vCloud Director that supported NSX-T was 9.5. It supported only NSX-T version 2.3 and the integration was very basic. All vCloud Director could do was to import NSX-T overlay logical segments (virtual networks) created manually by system administrator. These networks were imported into a specific tenant Org VDC as Org VDC networks.

The next version of vCloud Director – 9.7 supported only NSX-T 2.4 and from the feature perspective not much had changed. You could still only import networks. Under the hood the integration however used completely new set of NSX-T policy based APIs and there were some minor UI improvements in registering NSX-T Manager.

While I do not want to go too deep into the actual NSX-T architecture I fully expect that not all readers of this blog are fully familiar with NSX-T and how it differs from NSX-V. Let me quickly highlight major points that are relevant for topic of this blog post.

As mentioned above since NSX-T is not vCenter Server dependent, it is attached to Cloud Director independently from VC.

(Geneve) network pool creation is the same as with VXLAN – you provide mapping to an existing NSX-T overlay transport zone.

Now you can create Provider VDC (PVDC) which is as usual mapped to a vSphere cluster or resource pool. A particular cluster used by PVDC must be prepared for NSX-V or NSX-T and all clusters must share the same NSX flavor. It means you cannot mix NSX-V clusters with NSX-T in the same PVDC. However you can easily share NSX-V and NSX-T in the same vCenter Server, you will then just have to create multiple PVDCs. Although NSX-T can span VCs, PVDC cannot – that limitation still remains. When creating NSX-T backed PVDC you will have to specify the Geneve Network Pool created in the previous step.

Within PVDC you can start creating Org VDCs for your tenants – no difference there.

Org VDCs without routable networks are not very useful. To remedy this we must create external networks and Org VDC Edge Gateways. Here the concept quite differs from NSX-V. Although you could deploy provider ECMP Edges with NSX-V as well (and I described here how to do so), it is mandatory with NSX-T. You will have to pre-create T0 GW in NSX-T Manager (ECMP active – active is recommended). This T0 GW will provide external networking access for your tenants and should be routable from the internet. Instead of just importing external network port group how you would do with NSX-V you will import the whole T0 GW in Cloud Director.

During the import you will also have to specify IP subnets and pools that the T0 GW can use for IP sub-allocation to tenants.

Once the external network exist you can create tenant Org VDC Edge Gateways. The service provider can pick specific existing NSX-T Edge Cluster for their placement.

T1 GWs are always deployed in Active x Standby configuration, the placement of active node is automated by NSX-T. The router interlink between T0 and T1 GWs is also created automatically by NSX-T. It is possible to disconnect Org VDC Edge GW from Tier-0 GW (this is for example used in NSX-V to NSX-T migration scenario).

During the Org VDC Edge Gateway the service providers also allocates range of IPs from the external network. Whereas with NSX-V these would actually be assigned to the Org VDC Edge Gateway uplink, this is not the case with NSX-T. Once they are actually used in a specific T1 NAT rule, NSX-T will automatically create static route on the T0 GW and start routing to the correct T1 GW.

There are four major types of NSX-T based Org VDC networks and three of them are available to be created via UI: 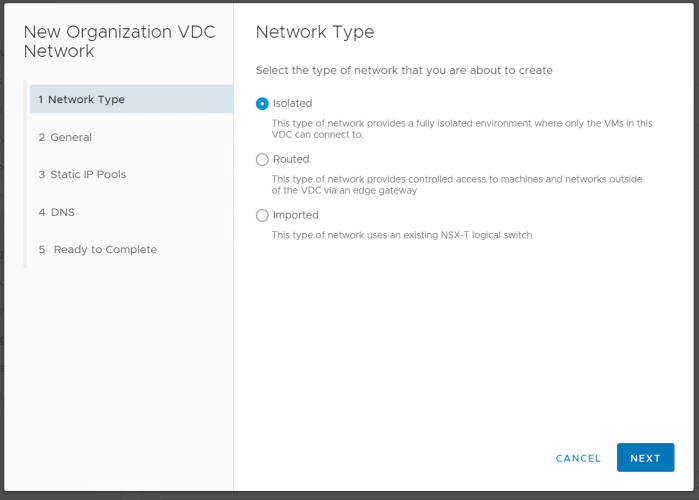 Note that only Isolated and routed networks can be created by tenants.

In direct connect use case it is desirable to announce routed Org VDC networks upstream so workloads are reachable directly without any NAT. This is possible in Cloud Director version 10.1, but requires dedicated Tier-0 GW for the particular tenant. The provider must create new Tier-0, connect it to tenant’s particular direct connect transit VLAN and then when deploying Org VDC Edge GW select Dedicate External Network switch.

Cloud Director will make sure that dedicated External Network Tier-0 GW is not accessible to any other Org VDC Edge Gateway.

Tenant can then configure on its Org VDC Edge GW BGP routing, which is in fact set by Cloud Director on the dedicated Tier-0 GW (while Tier-0 to Tier-1 routes are auto-plumbed by NSX).

All other services are currently not supported. This might be due to NSX-T not having them implemented yet, or Cloud Director not catching up yet. Expect big progress here with each new Cloud Director and NSX-T release.

All NSX-T related features are available in the Cloud Director OpenAPI (CloudAPI). The pass through API approach that you might be familiar with from the Advanced Networking NSX-V implementation is not used!

I have summarized all Cloud Director networking features in the following table for quick comparison between NSX-V and NSX-T.