With vCloud Director version 9 new API (cloudapi) based on OpenAPI specification has been introduced next to the legacy based XML API. In vCloud Director 9.5 API Explorer enables consumption of the API directly from the vCloud UI endpoint (read here). Most of the new features are using this OpenAPI such as H5 UI branding, extensions, vRealize Orchestrator service integrations, Cross VDC networking and Roles management.

OpenAPI is very simple to use, JSON based with links provided in headers. However there might be some issues when load balancer with SSL termination is involved as due to the header or payload size the request response will not get through the load balancer.

One such issue is documented in the vCloud Director 9.5 release notes. Attempting to edit Global Rules in the new H5 UI will fail with an error:

unexpected character at line 1 column 1 of the JSON data.

In my case I am using NSX Edge Load balancer with SSL termination and below is the error screenshot:

There are multiple workarounds described in the release notes but actually none worked for me:

After some investigations and troubleshooting I discovered that there is a way to increase Edge LB buffer size above the default 32 KB with similar call to the one in the KB 52553:

The above call (NSX 6.4) was enough to fix the issue for me and i can now edit Global Roles in the UI: 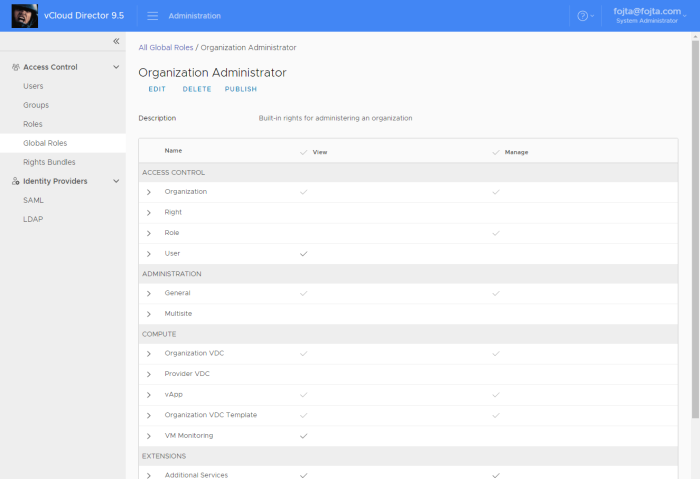