While the biggest new feature of vCloud Director 8.20 is the access for tenants to NSX advanced services on Edge Gateways and distributed firewall, service providers will love automatic import of vCenter virtual machines.

The system administrator can just drag any vCenter VM into Org VDC resource pool and vCloud Director will automatically discover such VM and import it. The VM can be even in running state. This enables migration use cases, or allows service providers to easily offer self service access to their fully managed vSphere only environments by simply connecting them to vCloud Director.

In the picture below you can see Org VDC Resource Pool (ACME_PAYG) in vCenter hierarchy with two regular vCenter VMs that were dragged there. VM_C1 was running, while VM_P2 was powered-off.

The next picture shows automatically created vApps for these two imported VMs with the prefix Discovered. 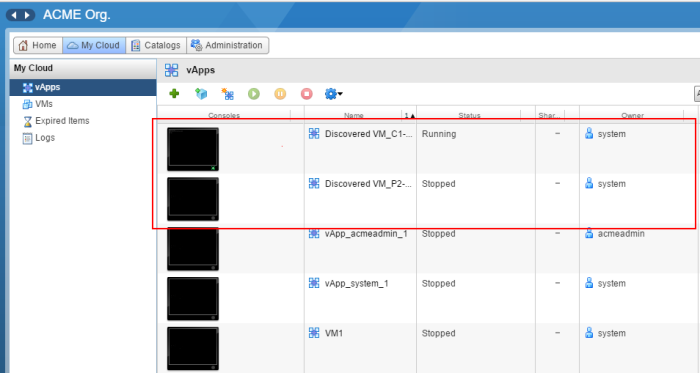 While these vApps resemble regular vApps they are not real vCloud Director vApps until they are adopted. The adoption happens when the VM inside the vApp is somehow reconfigured.

By default VM discovery is enabled for every Organization in vCloud Director. It can be disabled in General Settings (UI or API) 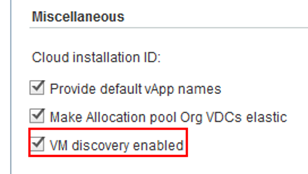 or with CMT command on VCD cell:

This behavior can be overridden at Org VDC level with API element <VmDiscoveryEnabled>.

Here are the differences between Discovered and Adopted vApp: